If you’re unfamiliar with Moldova, don’t worry – even the most experienced and independent travellers have missed this Eastern European nation wedged between Romania and Ukraine. Though small (about the size of Belgium with a population of 4 million), Moldova is among the world’s top 20 wine-producing countries and has the highest density of vineyards to arable land of any country on the planet. There are three existing Wine Routes to help visitors navigate Moldova’s best wineries, and with more routes opening in March 2020, it will be much easier for wine-lovers to explore more of the country’s many vineyards and historical sites.

Ask a recent visitor about their travels in Moldova and you’re likely to hear of remote roads leading to vineyards scattered across the rolling countryside. You’re nearly guaranteed to be regaled with stories of the country’s two best-known wineries. One is Milestii Mici, which has huge cellars that are 200km-long, 80m-deep and holds a Guinness World Record for storing more than 1.5 million bottles. The other winery, Cricova, dominates the nation’s sparkling wine production and has a 120km-long cellar, accessed by golf cart. There’ll be tastings in smaller, family-based enterprises – standing around oak barrels in intimate basements – and in high-end locales, where guests gather in polished showrooms and production holds its own against winemakers worldwide.

However, another recurring refrain from the visitor would be the navigation challenges an independent traveller faces when trying to logically string together and locate wineries and other points of interest along the way. With the launch of the new Wine Routes of Moldova and expansion of current information, adventurers and gourmands will be better equipped to discover this former Soviet Republic.

At present, the Wine Routes of Moldova is a network of three routes, which reach into the country’s historic wine regions of Codru, Valul lui Traian and Stefan Voda. The roads – each can begin from the capital, Chişinău – also serve as cultural and adventure corridors that map out festival, events, and key points of interests such as B&Bs, fortresses, monasteries, nature reserves, and archaeological sites. For travellers, this network provides clear itineraries while exposing an unsullied authenticity and unexpectedly gourmet mindset anchored by more than 5000 years of wine-making history and a significant level of wine production.

“The routes give people an idea how to connect the wineries in a more efficient way, so that they can get the most out of their travel experience,” says Gheorghe Arpentin, Director of Moldova’s National Office for Vine and Wine. The new itineraries, according to Arpentin, already have some 150 road signs in place taking travellers to 18 wineries, established vineyards and emerging wine producers. By the end of 2021, that number is expected to reach 55. “Moreover, the promotion of wine routes can serve as motivation for wineries that are still debating the implementation of touristic services,” continues Mr Arpentin. “Developing wine tourism in the rural regions serves as an engine of socio-economic growth, creating new jobs, and slowing the migration, as well as preserving local heritage and reviving traditions.”

Each of the three regions, covered by the existing Wine Routes, carries an EU-recognized PGI, or protected geographical indication, which honours the symbiotic relationship between specific locales and agricultural products. (Moldova also has a fourth PGI region, called Divin, which encompasses the entire country.) The Valul lui Traian PGI Wine Route extends from Chişinău to the south-west, toward the banks of the Danube River. The region is known for its red varieties and passes through Moldova’s autonomous Gagauzia territory with Turkish ties and diverse gastronomy. The Stefan Voda PGI Wine Route, which stretches from the capital to the south-east, runs along the Ukranian border near the Black Sea. And the central Codru PGI wine route, which boasts outstanding whites, reds, and sparkling wine, includes the largest number of wineries as well as some of the largest and most respected vineyards.

“With a wine route, tourists will be able to visit the country ‘better’ — especially solo travelers,” says Mihaela Sirbu, the tourism and marketing manager at Asconi Winery, which sits along the Codru Route. “Each region has its own traditions, flavors, and wines and the wine route will help them get the most out of their trip. Moldova is such a diverse and raw country, and by raw, I mean one can still have an authentic traditional experience, without it being staged. Throughout the country there are various elements that will tell you a story about our history.”

The new routes lay bare the meditative experience that is a drive through Moldova’s back roads and villages. The only sounds are those of tractors and families working farms and turning over pitch-black dirt, which gives rise to a sea of vineyards radiating in every direction. This combination of rich earth (the temptation is to grab handfuls of it), and the wine it produces, has helped define this fertile stretch of soil for thousands of years.

“There are many opportunities that come with the launch of the new wine routes, but perhaps the main one is that visitors will be able to really get to know our country,” says Natasha Curnic, the director of GoAdventure Moldova, which leads visitors on experiences that include active holidays as well as wine, gastronomic, and cultural tours. “We are a country that takes its wine very seriously. But, we also have so much more in one of the most genuinely untouched spots in Europe.” 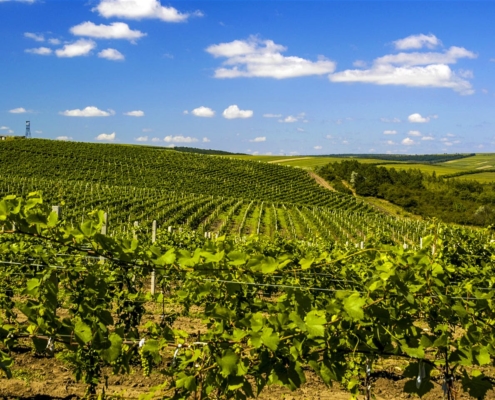 Moldova, a “slow” invitation to discover the world of wine